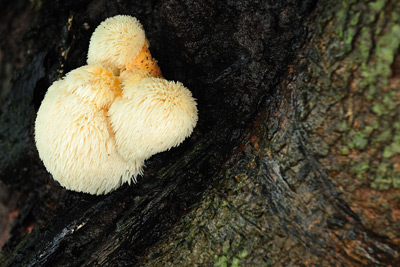 Lion’s Mane is a unique “toothed fungus,” composed of cascading downward pointing spines. A gourmet culinary mushroom once reserved for royal palates1, Lion’s Mane has a delicious vermicelli-like texture and distinctive seafood flavor, sometimes described as being similar to lobster.2 Lion’s Mane has been found to contain substances that exhibit an ability to speed the repair and regeneration of nerves.3

In traditional Chinese medicine, Lion’s Maine is used to support the five primary organs and to promote strength, good digestion, and overall vigor. Lion’s Mane is also prescribed for ulcers and chronic gastritis4.

Perhaps the most exciting discovery concerning Lion’s Mane is a group of compounds called erinacines which stimulate nerve regrowth.5 Now known as nerve growth stimulant (NGS) factor, these compounds increase production of nerve growth factor (NGF), which is responsible for nerve health and repair, and plays a key role in a number of neurological functions.6

Supplementation with Lion’s Mane extract has been shown to improve myelination7, the process whereby a fatty layer called myelin accumulates around nerve cells, protecting them and allowing them to transmit information faster and perform more complex brain functions. Low levels of NGF are found in early stages of both Alzheimer’s and dementia8. NGS factor from erinancines exhibit the ability to stimulate neurons to re-grow, suggesting application for the treatment of cognitive decline and neurological trauma9.

Lion’s Mane has been shown clinically beneficial in mild and severe cognitive decline. In one study with dementia patients, 6 out of 7 patients showed improvement in functional capacity (ability to understand, communicate, and remember), and all 7 improved in functional independence (ability to carry out essential daily tasks such as dressing, eating, and walking)10. Another double-blind study involving patients with mild cognitive impairment found a control group taking Lion’s Mane supplements showed significantly increased scores on cognitive function tests compared with those taking a placebo11.

Lion’s Mane demonstrates promising benefits for MS patients due to its ability to increase myelin production, the breakdown of which is responsible for the symptoms of MS. In addition, Lion’s Mane’s immune-modulating properties help suppress the chronic inflammatory response that causes brain destruction in neurodegenerative disorders such as MS12.

NGF also accelerates wound healing and is involved with pain sensitivity and sensory function. NGF stimulates the function of the immune system, for which has NGF specific receptor sites14.

Researchers looked at several compounds, designated erinacines E, F, and G, found in the mycelia of Lion’s Mane mushroom. In an in vitro experiment, two of the compounds, erinacines E and F, stimulated astroglial cells (a certain type of brain cell) to produce nerve growth factor, an important protein for brain cell growth.

2. Erinacine A increases catecholamine and nerve growth factor content in the central nervous system of rats

In this in vivo study involving rats, researchers sought to determine the effects of erinacine A, a compound found in Lion’s Mane mushroom, on the brain health of rats. Rats were administered erinacine A for five weeks beginning at birth. The treated rats had higher levels of noradrenaline (an important neurotransmitter), homovanillic acid (a catecholamine) and nerve growth factor (a protein required for the growth of certain types of brain cells).

5. The influence of Hericium erinaceus extract on myelination process in vitro

In this in vitro experiment, researchers looked at the effects of Hericium erinaceus, or Lion’s Mane, on myelination of nerves. They treated nerve and glial cells with an extract of Hericium and observed the results. The cells grew normally, while the myelination process began earlier and at a greater rate in the treated cells compared to control cells. Researchers conclude that Hericium helped to regulate myelination with no toxic effects.

Researchers examined the effects of an extract of Hericium erinaceus (Lion’s Mane) on nerve injury in rats. Injury to the axonotmetic peroneal nerve was induced in rats. One group was given Lion’s Mane extract daily for several weeks; the control group did not receive Lion’s Mane. Researchers evaluated recovery by examining walking behavior and toe-spreading reflex. The rats who received the extract recovered significantly faster by both measures as compared to the control group. Researchers believe that the administration of the extract at the beginning of the recovery period was key to its effectiveness.

In this in vivo study involving rats, researchers produced a methanol extract of Hericium erinaceus (Lion’s Mane) and examined its effects on blood sugar levels. The extract was included in the daily diet of one group of diabetic rats; a control group was given no extract. The treated rats had lower blood sugar levels than untreated rats. The control group exhibited more excessive thirst than the treated rats.  In addition, rats given greater doses of the extract showed greater beneficial changes in triglyceride and total cholesterol levels compared to rats given smaller doses of the extract.

In this study, researchers sought to determine the mechanism of action by which Hericium erinaceus (Lion’s Mane) suppresses cancer growth. They looked at the effects of Hericium on liver cancer cells. They discovered that Lion’s Mane helps boost the effects of doxorubicin, a cancer drug that stimulates apoptosis (cell death). It helps to increase the amount of intracellular doxorubicin by suppressing NF-kB, a protein complex that is involved in immune system response. Researchers believe that Lion’s Mane combined with doxorubicin therapy may be beneficial in cases of drug-resistant liver cancers.

10. Cytoprotective effects of Hericium erinaceus on gastric mucosa in rats

In this in vitro study, researchers examined the effects of extracts of Lion’s Mane mushroom on neurites (outgrowths from a neuron cell that help make connections with other cells to form neural networks). They tested extracts derived from two parts of the mushroom, the mycelium and the fruiting body. While both extracts stimulated neurite outgrowth, the mycelium extract had a much greater effect.

In this in vitro study, researchers studied the effects of Lion’s Mane extracts on rat brains. Researchers treated rat brain samples with L-glutamic acid to induce excitation of the neurons, and followed it with treatment with Lion’s Mane mushroom extract. The extract suppressed the activity of neurons, but did not inhibit other neuron activity such as cell growth. It also improved myelination of nerve fibers. There were no toxic effects observed.