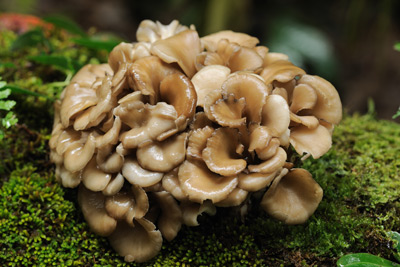 Grifola frondosa, more commonly known as maitake or “Hen-of-the-woods,” grows throughout the temperate forests of North America, as well as in China and Europe. Long valued as a gourmet culinary mushroom, maitake also has excellent nutritional value, containing a variety of beneficial phospholipids, unsaturated fatty acids, and vitamin D2.1 Maitake offers medicinal properties comparable to those of reishi and cordyceps, showing a range of anti-cancer effects,2,3,4immune-stimulating properties,5 and blood glucose lowering action in diabetes.6,7,8

Maitake was available only as a wild-harvested mushroom until 1979, when cultivation techniques were developed.9 Before that time, it is reported that Japanese mushroom hunters foraged for maitake alone and did not disclose the location of their finds to anyone, even their own family, so desirable and valuable was the mushroom.10

Mushroom researcher Hiroaki Nanba reports that maitake has the strongest tumor growth inhibition properties of all mushrooms studied.11 In one study with mice bearing breast cancer tumors, complete remission was confirmed on four out of ten fed with maitake, while the remaining six showed a 90 percent suppression rate.12

Maitake appears to exert strong anti-cancer effects by increasing immune activity. In one clinical study a specific beta-glucan found in maitake, known as D-fraction, administered to cancer patients increased NK cell activity and effectively repressed cancer progression in all ten subjects.13 When maitake was combined with chemotherapy, immune cell activities were enhanced 1.2-1.4 times, compared with chemotherapy alone14. In a study using maitake MD-fraction (similar to the beta-glucan D-fraction) from maitake, cancer regression or significant symptom improvement was observed in 58.3 percent of liver cancer patients, 68.8 percent of breast cancer patients, and 62.5 percent of lung cancer patients.15 Maitake has also been shown to help lessen the side effects of chemotherapy, including hair loss, nausea, and loss of appetite.16

Maitake has demonstrated significant hepatoprotective action. In animal studies on rats with hepatitis, maitake effectively protected the liver where five other medicinal mushroom species failed. Maitake’s hepoprotective effects have been shown in clinical studies as well.25 In one clinical trial with hepatitis B patients, the group taking maitake had a higher rate of recovery, and seroconversion from HbeAG positive to negative was 44%, compared with 13% in the control group.26

Maitake has been demonstrated to serve as a powerful immunomodulator. Supplementation with powdered maitake, for example, enhanced the activity of macrophages, NK cells, and T-cells.27 In addition to showing benefits for those dealing with cancer and other diseases, maitake’s immune-stimulating properties may make it useful for those with chronic fatigue syndrome.28

Research in Japan has shown that compounds in maitake may increase collagen synthesis31 and alleviate dry skin.32

32 Nagao, M., et al. Augmentation of sebaceous lipogenesis by an ethanol extract of Grifola frondosa (Maitake mushroom) in hamsters in vivo and in vitroExperimental Dermatology. 18 (8), 730-733. 2009.

In this series of experiments, researchers examined the effects of D-fraction, an extract from maitake mushroom. When fed to mice, it had anti-tumoric effects. Testing showed that the D-fraction helped to stimulate the immune system. D-fraction boosted the cell-destroying capability of macrophages and T-cells.

In this article, the researcher examined the effects of maitake D-fraction on mice and on cancer patients. Mice given D-fraction either orally or by injection showed increased immune system response. Testing also revealed that maitake is non-toxic even at very high doses. In another experiment involving mice, it was demonstrated that maitake may help prevent metastasis. A clinical study involving 165 stage III-IV cancer patients showed that maitake is effective against certain cancers, including breast, lung, and liver, and can improve response to chemotherapy. 90% of patients reported fewer unpleasant side effects to chemotherapy while on a maitake regimen. In patients with bone cancer, stomach cancer, or leukemia, maitake was not as effective.

Researchers examined the effects of a combination of maitake mushroom powder and MD-fraction on cancer patients. Patients ranged in age from 22 to 57, and had stages II through IV cancers. Between 58 and 69% of liver, breast, and lung cancer patients experienced regression of their cancers and/or improved symptoms. It was also discovered that maitake enhanced the effects of chemotherapy by boosting immune activity. Patients suffering from leukemia, stomach cancer and brain cancer showed significantly less improvement (10 to 20%).

5. Effect of maitake (Grifola frondosa) D-fraction on the activation of NK cells in cancer patients

6. Anti-diabetic activity present in the fruit body of Grifola frondosa (maitake). I.

In this in vivo study involving mice, researchers looked at the effects of maitake mushroom on blood sugar levels. One group of mice was given powdered maitake; a control group was not. The mice receiving maitake had reduced blood sugar levels compared to the control group. The maitake mice also showed beneficial changes in insulin and triglyceride levels.

7. Anti-diabetic effect of an alpha-glucan from fruit body of maitake (Grifola frondosa) on KK-Ay mice

In this in vivo study, researchers investigated the effects of a compound (alpha glucan) from maitake mushroom on diabetic mice. Administration of this compound to the mice had numerous beneficial effects. Body weight, fasting blood sugar levels, insulin levels, triglycerides, and other markers significantly decreased. The compound also stimulated superoxide dismutase antioxidant activity and increased glutathione levels (also an antioxidant). Disease markers detected in the pancreas improved as well.

Researchers examined the effects of maitake mushroom compounds on cancer and diabetes. In vitro experiments revealed that D-fraction maitake was effective against prostate cancer cells, killing over 95% in 24 hours. Equally effective was a dose of D-fraction one-eighth the size combined with vitamin C. Another experiment revealed that when D-fraction was combined with the drug carmustine, toxicity to cancer cells increased from 50% to 90%. In clinical trials, the SX-fraction of maitake was given to diabetes patients. All patients achieved varying degrees of improvement in blood sugar levels.

In this 9-week experiment, researchers fed shiitake and maitake mushroom powders to hypertensive rats to determine their effects. In additional to a 5% mushroom diet, the rats were given a salt water solution to drink instead of regular water (salt can contribute to hypertension). The mushrooms had varying effects, but overall the results were beneficial. Blood pressure and cholesterol were lowered. Researchers conclude that the mushroom powders were responsible for lowering blood pressure.

12. Biological activities of the polysaccharides produced from submerged culture of the edible basidiomyceta Grifola frondosa

Researchers extracted various polysaccharides from maitake mushroom and examined their characteristics. Various tests revealed that most of them demonstrated antioxidant function. Two in particular, designated P-1 and P-3, stimulated a 25% increase in the number of fibroblasts (connective tissue cells). P-3 also induced collagen formation in fibroblasts by 80%. Two other polysaccharides, designated G-2 and G-3, also produced a rapid increase in fibroblasts.

13. Augmentation of sebaceous lipogenesis by an ethanol extract of Grifola frondosa (Maitake mushroom) in hamsters in vivo and in vitro

In this series of experiments, researchers looked at the ability of maitake mushroom to alleviate dry skin. They produced an ethanol extract of maitake and applied it to the skin of hamsters. They found that maitake enhanced formation of components of sebum, which protects skin and keeps it from drying out. Researchers conclude that maitake may be helpful in treating dry skin.

15. Antihypertensive and metabolic effects of whole maitake mushroom powder and its fractions in two rat strains

In this in vivo study involving rats, researchers compared the metabolic effects of powdered maitake mushroom and two maitake extracts. One group of rats was insulin resistant; the other group had high blood pressure. Four different diets were tested on each group of rats: a control diet, a diet containing maitake mushroom powder, a diet containing ether soluble extract, and a diet containing water soluble extract. Depending on the type of rats and the diet, researchers found that the powdered maitake and/or the extracts lowered blood pressure, blood sugar, and associated markers in varying amounts.

In this in vivo experiment, researchers examined the effects of a purified glucan from maitake, MD-fraction, on mice treated with the chemotherapy drug cisplatin. Cisplatin can cause serious side effects including damage to kidneys and bone marrow cells. The researchers found that MD-fraction boosted the anti-cancer activity of cisplatin, such as increasing natural killer cell activity. MD-fraction also helped protect bone marrow cells and kidneys from cisplatin-induced damage.

20. Induction of cell death in renal cell carcinoma with combination of D-fraction and vitamin C