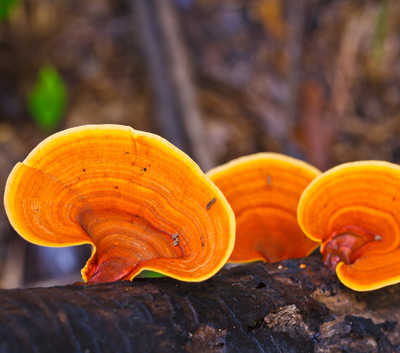 Widely distributed across the world, from Asia, throughout the Amazon, southern regions of North America. Prefers subtropical regions; will also grow in warmer temperate regions.

Known as the “mushroom of immortality” and “spirit mushroom” in Japan and China, reishi has been used medicinally for millennia, revered for its health-promoting and tonifying effects.1 Traditionally reishi was prescribed for its anti-cancer,2 liver supportive3, and anti-aging properties.4 In the Materia Medica of Chinese medicine, reishi is listed among the “superior tonics” (medicines which can be taken at any dose desired for any length of time without adverse affects), and is believed to promote longevity.5

Reishi likely owes many of its health benefits to its high concentration of triterpenoids, a class of steroid-like compounds. Of the more than 119 triterpenoids identified in reishi, there are two main classes, ganoderic and lucidic, which have anti-histaminic, anti-inflammatory, anti-tumor and hepatoprotective effects6.

Reishi has been shown to inhibit all 4 types of allergic reactions, including contact dermatitis, asthma, and other allergic diseases7. Animal studies show reishi inhibits the release of histamines, which are responsible for types I, II, III and IV allergic sensitivities. Clinically, reishi has been observed to stabilize blood levels of immunoglobulin, the antibodies which play an essential role in the biochemistry of allergic reactions8. Reishi may also inhibit food allergies; one Chinese reishi-based formula was able to completely block anaphylactic reaction to peanut allergy in a mouse-model9.

A powerful antioxidant, reishi may play an important role in anti-aging due to its free-radical scavenging effects. Studies have shown reishi stimulates special immune cells called macrophages to scavenge and destroy free radicals in the body10.

Reishi’s triterpenes make it a powerful anti-inflammatory. One study comparing an extract of reishi to prednisone for arthritis found its effect comparable, but with few or no side effects11. The combination of reishi’s anti-inflammatory action with its immune-modulating properties give it promise is the treatment of autoimmune conditions, including rheumatoid arthritis12.

The complex polysaccharides found in reishi increase the body’s immune activity. Studies have found reishi activates immune cells such as macrophages and helper T cells, increases levels of NK cells, and boosts immunoglobin levels. The result is an improved immune response to foreign cells, whether bacteria, virus, or tumor13. Clinical studies show reishi’s immune-stimulating properties may make it helpful for those with HIV14.

In China and Japan, reishi was traditionally sought after by those with cancer15. Reishi’s immune-enhancing properties are largely responsible for its evident anti-cancer and anti-tumor effects. One study found reishi’s polysaccarides caused a 5- to 29-fold increase in tumor necrosis factors, as well as augmenting interleukins and T-lymphocytes16. The triterpenes in reishi also show cytotoxic activity against several cancer cell lines17.

Traditionally considered protective to the heart and lungs, reishi positively impacts cardiovascular health18. It has a relaxant effect on the smooth muscle tissue of the lungs and heart, increasing the oxygen-absorbing capacity of the alveoli, and enhancing vasodilation, which increases coronary flow. One study among multiple medical centers showed a preparation with reishi decreased chest pain, palpitation, and shortness of breath, and improved patients’ ECGs19. Further clinical studies show reishi helpful in the treatment of bronchitis and asthma20. The mushroom’s anti-inflammatory action also contributes to its cardiotonic effect.

Reishi is used by athletes to enhance performance due to its combination of anti-inflammatory, cardiotonic, and cellular energy-promoting effects. In animal studies, an extract from reishi was found to increase the swimming endurance of mice and decrease muscle exhaustion and serum lactate21. Reishi’s abiltiy to enhance endurance gives it promise for use in Chronic Fatigue Syndrome22.

Clinical and animal studies have found reishi extracts effective in lowering blood glucose levels23. Reishi has also been found to be a liver protectant in animal studies24.

Considered to have a calming effect, reishi has been reported to be helpful for those with anxiety, nervousness, and difficulty sleeping25.

1. Antitumor activity of the sporoderm-broken germinating spores of Ganoderma lucidum

2. Comparative studies on the immunomodulatory and antitumor activities of the different parts of fruiting body of Ganoderma lucidum and Ganoderma spores

In this series of experiments, researchers compared four different parts of the Ganoderma lucidum (reishi) mushroom for their anti-cancer activity in mice. They created hot water extracts of the whole fruiting body, the pileus, and the stipe. They also tested the spores. The fruiting body and stipe extract, and spores had greater effects against tumor growth than the pileus extract. Groups of mice given the stipe extract or the spores also showed greater production of lymphocytes (white blood cells important for immune activity) in the spleen.

Researchers examined the effects of an extract of Ganoderma lucidum (reishi mushroom) on colon cancer. They found that the extract inhibited multiplication of human colon cancer cells in vitro and inhibited tumor growth in vivo in xenograft models (in which human tumors are grown in laboratory animals). The researchers determined that the mushroom extract was effective in two ways. It likely caused cells to stop dividing at the G0/G1 phase, and it caused autophagy, wherein the cells’ own enzymes break it down.

4. Inhibitory effects of Ganoderma lucidum on tumorigenesis and metastasis of human hepatoma cells in cells and animal models

5. The anti-invasive effect of lucidenic acids isolated from a new Ganoderma lucidum strain

6. Lucidenic acids P and Q, methyl lucidenate P, and other triterpenoids from the fungus Ganoderma lucidum and their inhibitory effects on Epstein-Barr virus activation

7. Suppression of the inflammatory response by triterpenes isolated from the mushroom Ganoderma lucidum

In this series of experiments, researchers examined the effects of triterpene extract from reishi mushroom on inflammation. In an in vitro experiment, they induced inflammation in mouse cells and treated them with the reishi extract. The extract suppressed various markers of inflammation, including tumor necrosis factor alpha, interleukin-6, nitric oxide, and prostaglandin. It also suppressed transcription factor NF-kappaB (which is associated with inflammation and cancer when it goes awry), inhibited the AP-1 signaling pathway (linked to cell proliferation and apoptosis), and suppressed COX-2 activity (also associated with inflammation).

In this series of in vitro experiments, researchers looked at the effects of Ganoderma lucidim (reishi mushroom) spores and dried fruiting body on cancer cells. Highly invasive breast and cancer cells were treated with Ganoderma. Ganoderma inhibited transcription factors AP-1 (which regulates gene expression) and NF-kappaB (which is associated with cancer if it is incorrectly regulated) in both types of cancer cells. The extract also prevented the cancer cells from migrating. Researchers conclude that the spores and dried fruiting body of reishi may be of benefit in cancer treatment.

In this study, researchers sought to determine the mechanism of action of Ganoderma lucidum against breast cancer cells. A highly invasive line of breast cancer cells, MDA-MB-231, was treated with Ganoderma and the biochemical activity was studied. Researchers learned that Ganoderma influences Akt and NF-kappaB signaling. Akt is an enzyme that controls cellular processes. NF-kappaB controls DNA transcription and, when dysregulated, is associated with cancer.

10. Effects of ganopoly (a Ganoderma lucidum polysaccharide extract) on the immune functions in advanced-stage cancer patients

In this clinical study, researchers looked at the effects of polysaccharides from Ganoderma lucidum (reishi mushroom) on immune function patients with advanced cancer. Patients were treated with reishi polysaccharides three times a day for 12 weeks. At the 12-week mark, as compared to pre-trial measurements, blood levels of Interleukin-2, Interleukin-6, and interferon were significantly higher. Levels of Interleukin-1 and tumor necrosis factor alpha were significantly lower. Natural killer cell activity was higher, as was the number of CD56 cells (a type of immune system cell). Researchers conclude that the reishi polysaccharides boosted immune response in the cancer patients.

11. Ganoderic acid T inhibits tumor invasion in vitro and in vivo through inhibition of MMP expression

Researchers isolated a compound, ganoderic acid T, from reishi mushroom and tested it for its effects on tumor invasion. Testing indicated that the compound suppressed multiplication and migration of human colon cancer cells in vitro. Researchers found that the compound also stopped migration of a highly invasive type of human lung cancer cells in vitro. The compound also influenced the actions of nuclear factor-kappaB, inhibiting the activity of MMP-9, which when dysregulated can be associated with cancer. In vivo experiments also showed that ganoderic acid T inhibits tumor growth, metastasis, and MMP-2 and MMP-9 activity. Researchers conclude ganoderic acid T may have therapeutic value in cancer treatment.

12. Antimutagenic activity of methanolic extract of Ganoderma lucidum and its effect on hepatic damage caused by benzo[a]pyrene

Researchers examined a methanolic extract from Ganoderma lucidum (reishi mushroom) for its antimutagenic effects in vitro. Tests revealed that the greater the dose, the greater the antimutagenic effects. In tests involving rats, researchers gave a chemical mutagen to rats and measured its presence in their urine. They gave another group of rats the mushroom extract before giving them the mutagen. The urine from that group of rats showed that the extract suppressed the effects of the mutagen. The rats’ liver enzyme levels were also evaluated; results indicated that the mushroom extract helped to keep them at healthy levels (suggesting that liver damage was prevented). The extract also boosted anti-oxidant activity.

In this in vivo study, researchers looked at the effects of Ganoderma lucidum on liver fibrosis (scarring). The researchers induced scarring in rats, and then gave them an extract of Ganoderma lucidum (reishi mushroom). When scarring was induced in the rats, collagenase (the breaking down of collagen fibers) activity declined; the mushroom extract reversed this effect. The extract improved the structure of the liver tissue and reduced hydroxyproline, a collagen-like material. Researchers conclude that reishi mushroom extract inhibits liver fibrosis by boosting collagenase function.

14. In vitro and in vivo protective effects of proteoglycan isolated from mycelia of Ganoderma lucidum on carbon tetrachloride-induced liver injury

Researchers examined the effects of a fraction from reishi mushroom, Ganoderma lucidum proteoglycan, on liver damage. Liver injury was induced in mice and they were treated with the mushroom fraction. Test results revealed that the extract improved the structure of liver cells and liver function after they had been damaged. The extract helped to suppress the activity of tumor necrosis factor alpha (a cytokine associated with inflammation). The extract also boosted antioxidant activity. Researchers conclude that the extract can protect the liver against injury.

In this in vitro study, researchers looked at the effects of a triterpenoid extract of Ganoderma lucidum on hepatic stellate cells. These cells are normally inactive in the liver; they are activated when liver disease is present and can cause liver scarring. Through a variety of tests, researchers found that the extract suppressed the proliferation of hepatic stellate cells. One likely mechanism of action was by influencing the proteins (PDGF) that regulate cell growth.

16. Anti-hepatitis B activities of ganoderic acid from Ganoderma lucidum

Gao, Y., et al. International Journal of Medicinal Mushrooms. 2004. 6 (1).
In this clinical study, researchers studied the effects of a patented polysaccharide fraction of Ganoderma lucidum (reishi mushroom) on type II diabetes. Patients were given the mushroom fraction three times a day for 12 weeks; a control group of patients received a placebo. After 12 weeks, fasting and post-meal blood sugar levels dropped significantly in the treated group, as did HbA1c. Patients in the control group experienced no or insignificant changes. Researchers believe this polysaccharide fraction may be helpful in treating diabetes.

19. Cholesterol-lowering properties of Ganoderma lucidum in vitro, ex vivo, and in hamsters and minipigs

20. Experimental and clinical studies on inhibitory effect of Ganoderma lucidum on platelet aggregation