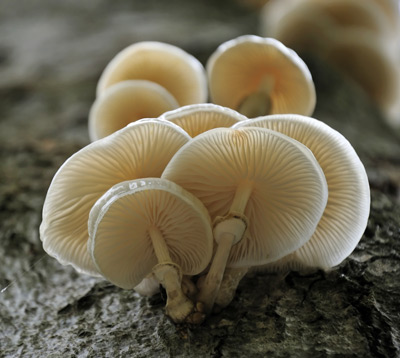 A choice culinary mushroom, oyster mushroom has a fleshy white or gray semicircular cap that resembles an oyster shell. Growing in layered clusters on deciduous trees, it is found throughout North America, Europe, and Asia1.

Oyster mushroom has an excellent nutritional profile. It is high in protein, with a near complete amino acid profile comparable to protein from animal sources. It also contains high levels of essential fatty acids, minerals, B vitamins, fiber, iron, and folic acid, and may be helpful in combating anemia2,3. Known for its cholesterol-lowering effects, oyster mushroom contains up to 2.8% lovastatin, the natural compound on which the cholesterol-lowering medication by the same name is based4. Oyster mushroom has been shown to reduce blood pressure, modulate immune response, inhibit tumor growth, help prevent blood clots, and have antibacterial properties5. The mushroom exhibits significant anti-aging effects, with a demonstrated ability to raise antioxidants to youth levels in murine models of aging.

In clinical studies with diabetic patients, oyster mushroom significantly lowered total cholesterol, triglycerides, blood glucose and blood pressure. When the mushroom was withdrawn the levels rose again, and resuming intake brought them back down6.

Numerous animal studies have also demonstrated oyster mushroom’s cholesterol-lowering ability7. The addition of oyster mushroom to the diet of Syrian hamsters completely eliminated the increase in liver cholesterol and triglycerides caused by a chronic alcohol intake, bringing levels below those of the control group given a normal diet8.

Oyster mushroom has demonstrated anti-cancer impact, inducing rapid apoptosis (cancer cell death) in studies9. Oyster mushroom prevented the development of bladder cancer and maintained nearly normal levels of immune activity in mice exposed to a carcinogen, compared to a control group not given the mushroom10. In vitro it showed a 76% inhibition rate against tumors11.

The marked antioxidant activity of oyster mushroom has been shown to alleviate liver toxicity, returning levels of key antioxidant enzymes such as glutathione back to near normal after carcinogen exposure12.

The antioxidant effects of oyster mushroom would seem to make it an excellent supplement for general health and anti-aging13. Studies have found that oyster mushroom improved antioxidant status during aging. Whereas the brains, hearts, and organs of old rats had diminished levels of glutathione, vitamins C and E compared to young ones, administration of oyster mushroom raised levels to where they did not differ significantly from their younger counterparts14.

Oyster mushroom has significant antibacterial properties. One study testing its in vitro antimicrobial activity found various forms of the extract had 50%, 87%, and 57.5% inhibition against candida, E. coli, and B. subtilis, respectively16.

10 Kurashige, S., Y. Akuzawa, and F. Endo. Effects of Lentinus edodes, Grifola frondosa and Pleurotus ostreatus administration on cancer outbreak, and activities of macrophages and lymphocytes in mice treated with a carcinogen, N-butyl-N-butanolnitrosoamine. Immunopharmacology and Immunotoxicology 19.2 (1997): 175-183.

14 Jayakumar, Thanasekaran, Philip Aloysius Thomas, and Pitchairaj Geraldine. “Protective effect of an extract of the oyster mushroom,< i> Pleurotus ostreatus</i>, on antioxidants of major organs of aged rats.” Experimental gerontology 42.3 (2007): 183-191.

In this in vivo rat study, researchers examined the effects of oyster mushrooms on cholesterol metabolism. The rats had a genetic sensitivity to dietary cholesterol. They were given a diet containing 4% oyster mushroom for several weeks. The rats showed no increases in blood levels of cholesterol at the four-week mark. At the seven-week mark, cholesterol had decreased in the rats eating the mushroom diet by 40% compared with the control group of rats who received no mushroom. Researchers determined that the lowered cholesterol was associated with lower levels of LDL and VLDL cholesterol.

2. Effect of oyster fungus (Pleurotus ostreatus) on serum and liver lipids of Syrian hamsters with a chronic alcohol intake

Gunde-Cimerman, N., and Plemenitas, A. International Journal of Medicinal Mushrooms. 2001. 3 (4).

6. Evidence for the anti-hyperlipidaemic activity of the edible fungus Pleurotus ostreatus

In this clinical trial, researchers looked at the effects of oyster mushroom on 89 diabetic patients. Regular testing and evaluation throughout the 24-day test period revealed beneficial results. The mushroom significantly lowered blood pressure, blood sugar, total cholesterol, and triglycerides. Starting and stopping the mushroom treatment during this period confirmed the results. No toxic effects were observed.

Researchers studied the effects of 23 different mushrooms and mushroom polysaccharides on cancer cells in vitro. They identified an extract of oyster mushroom as the most effective. When PC-3 cancer cells were treated with the water-soluble oyster mushroom extract, cell death occurred within two hours. The extract also greatly inhibited the cells’ tumor colony forming ability. The mushroom extract worked in a dose-dependent manner. Further investigation suggested that the active compounds in the extract are proteins or polypeptides.

9. Effects of Lentinus edodes, Grifola frondosa and Pleurotus ostreatus administration on cancer outbreak, and activities of macrophages and lymphocytes in mice treated with a carcinogen, N-butyl-N-butanolnitrosoamine

In this in vivo study, researchers looked at the effects of three mushrooms on cancer in mice. The mice were divided into four groups, and a carcinogenic chemical was given to all of them to induce cancer. Three different types of mushrooms, including oyster mushroom, were each given to one group of mice. The fourth group of mice, the control group, received no mushroom. 35% of the mice given oyster mushroom remained cancer free, as did 53 to 65% of the other mushroom mice. 100% of the control mice developed cancer. Mice given the carcinogen alone had suppressed macrophage and NK cell activity. Mice given the mushrooms, including oyster mushroom, had greater macrophage and NK cell activity. Lymphocytes from the mushroom-eating mice were more cytotoxic against cancer cells as well.

11. Protective effect of an extract of the oyster mushroom, Pleurotus ostreatus, on antioxidants of major organs of aged rats

12. An extract of the oyster mushroom, Pleurotus ostreatus, increases catalase gene expression and reduces protein oxidation during aging in rats

In this study, researchers compared catalase gene expression in three groups of rats: young rats, older rats, and older rats given oyster mushroom extract for 30 days. The rats were euthanized, and their livers and kidneys were examined. The organs of those given oyster mushroom showed greater CAT (catalase, an antioxidant enzyme) gene transcription compared to the older rats not given the mushroom. The treated rats also had lower protein carbonyl levels in their organs. Researchers conclude that oyster mushroom boosts CAT activity and may help protect against free radical damage associated with aging.

13. Effect of the oyster fungus on glycaemia and cholesterolaemia in rats with insulin-dependent diabetes

15. The inhibition of human tumor cell proliferation by RNase Po1, a member of the RNase T1 family, from Pleurotus ostreatus

Researchers examined the effects of a compound, RNase Po1 from oyster mushroom, on malignant tumor cells. Testing revealed that the compound suppressed multiplication of human neuroblastoma and leukemia cells. Researchers identified distinct structural changes in the leukemia cells due to treatment with the mushroom compound, which acted in a dose dependent manner. Researchers conclude that the compound stimulates cell death in cancer tumor cells.

Dried mycelia of two mushrooms, Trametes versicolor and Pleurotus ostreatus, were studied for their ability to protect against genetic damage. Mitomycin C was used to induce cell mutation. Both species of mushrooms demonstrated antigenotoxic properties by protecting the cells from the mutations.

In this double-blind, placebo-controlled study, researchers looked at the effects of pleuran on allergic response. Pleuran, a beta glucan isolated from oyster mushroom, is a recognized immune modulator. Study participants were children with recurrent respiratory tract infections. When given pleuran, the children displayed more stable blood levels of IgE (a marker for allergic activity) and a reduction in peripheral blood eosinophilia (increased levels are an indicator of allergic response). Researchers believe pleuran has potential benefits in the treatment of allergies.

The effects of various mushroom extracts from three mushrooms were evaluated on cancer cells. An aqueous extract of Pleurotus ostreatus (oyster mushroom) and an ethanol extract of Macrolepiota procera were the most effective against breast, kidney, and especially colon cancer cells. The extracts inhibited cancer cell proliferation and viability.

In this in vivo study involving rats, researchers looked at the effects of oyster mushroom extract on cholesterol reduction and antioxidant activity. One particular compound in the mushroom, chrysin, was also studied. Rats with high cholesterol were given bodyweight-adjusted doses of mushroom extract and chrysin for seven days. Blood sugar levels, cholesterol, and liver enzymes decreased significantly while antioxidant markers increased. The rats receiving the chrysin, as opposed to the extract, realized greater benefits, almost as much benefit as is conferred by the cholesterol drug lovastatin.